Note : This article was updated on 2nd July 2017 to describe new "auth free" functionality that will be available from Jomres 9.9.6 onwards.

We have deliberately made it as simple as possible to create your own API plugins for Jomres.

The functionality your plugin supplies can be as simple or as complicated as you need it to be, but there are a few files that are required for it to run :

Here is an example of what's in a scopes.json file.

Scope is important. In this example we've stuck with two simple descriptions "favourites_get" and "favourites_set", which means that only API clients that have been given permission to "Get favourites" can download the property uids that the user has set as a favourite. In theory you could have as many or as few scopes as you want, but we recommend you have at least one "get" scope and one "set" scope.

Any registered user can give rights to API Clients in the user "user_type" category, but only property managers can give API Clients "manager" access rights. There is also a user_type "super", which allows you to create functionality that's only available to Super Property Managers.

There are several sub-directories, which is where the Jomres functionality will look for your API scripts. Ignoring the "language" directory where you language file(s) are kept, the directories are DELETE, GET, POST & PUT. If an app is sending a Delete request, then the script that is run will be in the DELETE directory. "The primary or most-commonly-used HTTP verbs (or methods, as they are properly called) are POST, GET, PUT, PATCH, and DELETE. These correspond to create, read, update, and delete (or CRUD) operations, respectively." See http://www.restapitutorial.com/lessons/httpmethods.html

In Jomres 9.9.6 we are adding support for Authentication Free access to the REST API. This gives plugins the option to declare themselves as "authentication free" through an auth_free.json file.

The addition of this functionality opens up the scope of user access to your Jomres REST API by allowing anybody to search and retrieve information from your site. This removes potential barriers to adoption of your service.

Clients accessing an authentication free api feature ( such as Api Feature Search ) will not need to supply a Client ID/Secret keypair.

The auth_free.json file will need to contain

Users creating client id/secret pairs will not be able to select this auth free api features through the Client creation page, because it's automatically available to everybody.

Note : individual endpoints in api features can still restrict access through the use of validate_scope::validate('xxxxxxx_get');

Anatomy of an API plugin

The script in this example would be run when a GET request is sent to the API  www.example.com/jomres/api/favourites/

Let's look at the pertienent lines in the script to describe what they do :

This ensures that the call to the API has come through the Jomres API index.php and doesn't get called by itself. It is a security feature.

Jomres uses a micro-framework called Flight PHP ( http://flightphp.com/ ) because it's very small, fast and offers routing functionality. This example is basically a "route" script for Flight. To see the options that can be passed to a route, please see http://flightphp.com/learn#routing

Confirm that the client has the rights to access this scope.

Sets up the response object.

This calls the PDO object that's already been setup for talking to mysql.

The next few lines setup a prepared query for mysql to pull the user's favourites from the database. Describing this is outside of the scope of this article.

These lines set the value of the response, depending on whether or not any data was found. Generally you'll probably only want to send two responses, either the requested data or a 204 response code, which confirms that the script ran correctly, but there's no data to return. This is the data that's returned in the "Envelope".

Every authenticated response is contained by an envelope. That is, each response has a predictable set of keys with which you can expect to interact. The json response of the envelope typically looks like

So in this example the "data" section will have "ids" which in turn will be an array of property uids. 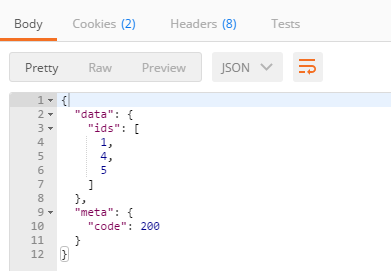 It is possible to get the script to call Jomres through the call_self class, like so :

This assumes that the Client has Properties Get rights.

You don't want to constantly re-invent the wheel, Jomres already does a lot so to re-use the Jomres framework's code to do something you can call Jomres functions directly once you've included the framwork code, like so

For example, to use the search functionality we've done this

which allows us to easily search by stars, as it returns a result that's easily maniplulated in our own off-site code, the j06110ajax_search_composite is already capable of searching by stars.